Laff with us on TV for sitcoms, movies and your ticket out of Snoozeville. Online or app, get the fave time-waster videos you crave. OMG, you’re welcome.

Laff’s launch was announced by Katz Broadcasting in January 2015 as having a scheduled launch date of April 15, 2015, which coincides with Tax Day in the United States, when tax returns are due and, as Broadcasting & Cable writer Jon Lafayette noted in an article on Laff’s launch, “people will need something to make them smile.”

Laff’s comedy-centered programming consists of a mix of theatrically released feature films, as well as off-network sitcoms. Laff would set itself apart from its multicast competitors by carrying more contemporary programming content, in contrast to the reruns of series from the 1980s and earlier commonly found on other over-the-air networks which rely on acquired content. 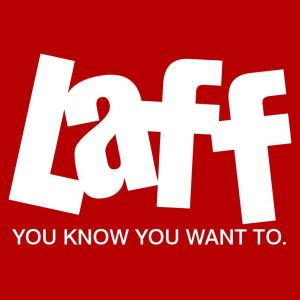